Blue Jay bandwagon fans have been happy fans for the past week and a half because when you’re hot, you’re hot. And the Jays have finally looked like the Jays we know and love.

Looking forward to the much anticipated ALCS that begins in 17 hours, I’ve been interested to see the match-up stats between Toronto and Cleveland showing that despite the Jays out-hitting, out-pitching and out-homering Cleveland, the Jays had a 3-4 record against Cleveland this season playing in July and August. I had to look back at the 7 games to figure out how that was possible. 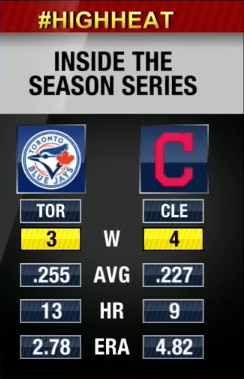 So, looking at the 4 games that were lost, Dickey pitched the first one. That’s ok, Dickey won’t be meeting them this series. The 2nd game lost was July 1st. Remember that 19 inning 1-2 loss on Canada Day when both Ryan Goins and Darwin Barney pitched the final 2 innings? That was the game that effectively took Goins out for the season. And Darwin gave up the homerun to end it. That game for sure could have gone either way and here’s hoping there are no 19 inning games with Barney pitching again in this series.

So that’s 2 losses accounted for. The 3rd loss was another 1-run loss with a 2-3 score on one of the rare occasions when Osuna blew the save by giving up 2 homeruns in the 9th, one to switch-hitter Jose Ramirez. Devon Travis also made 2 errors that game. And the 4th loss was another 1-run 2-3 game where Cecil gave up a 2-run homer to, once again Jose Ramirez, in the bottom of the 8th.

On the flipside, the Jays did get 1 of their 3 wins beating C. Kluber with a score of 17-1. That game probably accounts for much of the lopsided stats.

So overall, looks somewhat hopeful, although, Cleveland has a very different looking bullpen now, particularly due to the acquisition of A. Miller. Here’s hoping that Russell is due to break out of his ‘1-for’ playoffs so far.

Russell Martin could be the #BlueJays X-Factor in the ALCS vs Cleveland pic.twitter.com/ByF0VAgoSM

Toronto Blue Jays Baseball for newbie fans like me

Toronto Blue Jays Baseball for newbie fans like me